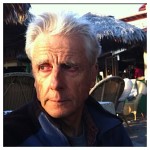 Jim Becket brings a varied career to his filmmaking: developmental economist, human rights lawyer, journalist and author. As Director of Public Information for the United Nations High Commissioner for Refugees, Jim made several films about international refugee problems around the world. Since then he has filmed in more than 35 countries, and is well versed in political issues affecting both industrialized nations and the global south. Most recently, he has made several documentaries on contemporary environmental issues, including The Green Patriarch, The Amazon: The End of Infinity, The Arctic: The Consequences of Human Folly and El Misterio del Capital de los Indigenas Amazonicos. Jim’s awards include festival Best Film awards, two Humanitas awards and a George Foster Peabody award. He has known Vandana Shiva for more than fifteen years.

Help us to finish The Seeds of Vandana Shiva! Your tax-deductible donation will be most appreciated. You can safely donate through our fiscal sponsor,