We have returned from our trip to India and are sorting through what we filmed.

We’re excited to do so, but first we want to report on our journey and let you know what we learned. Especially because today is World Food Day.

Every October 16 the Food and Agriculture Organization of the United Nations spearheads outreach and actions to eradicate hunger. This year’s theme, intersecting with the International Year of the Soil is “Social Protection and Agriculture.”

Not surprisingly, the inextricable link between soil, food systems and social justice was also a theme of our visit to India. On a Soil Pilgrimage led by Vandana Shiva (Navdanya), Ronnie Cummins (Organic Consumers Association), Andre Leu (IFOAM-International) and Will Allen (Sustainable Cotton Project), we filmed events with organic farmers, scientists and activists; at farms in the heart of the Bt cotton suicide belt; at Gandhi’s ashram on his birthday (a national holiday in India where the assembled pledged to make peace with the soil); and at Indore, where Sir Albert Howard (a founding father of the organic movement) learned organic methods from local Indian farmers and established a pioneering soil research lab.

One thing is clear: Healthy soil supports healthy crops, healthy farms, healthy consumers and healthy economies. It is also a solution to climate change.Why? Because the living soil draws carbon out of the atmosphere and sequesters it underground where it fuels food production.

Conversely, industrial agriculture disrupts the natural carbon cycle and actually depletes soil, along with its ability to sequester carbon. Worse, the industrial food system is responsible for more than 40% of climate disrupting carbon emissions.

Armed with solid research into the science of agriculture an exciting new project, Regeneration International, formed by Dr. Shiva and others also launches today. They are in Washington DC for an International Press Conference to promote regenerative agriculture as a solution to climate change.

Look down: The answer to hunger, poverty, ecological devastation and climate change is right under our feet.

With that thought in mind, we continue to edit our footage, including new interviews with Vandana’s son, sister, teachers, friends, her original publisher, Ronnie Cummins, Will Allen, Andre Leu and six inspiring young “seeds” of Vandana Shiva–farmers, artists, scientists and activists intent on regenerating a better world for us all. 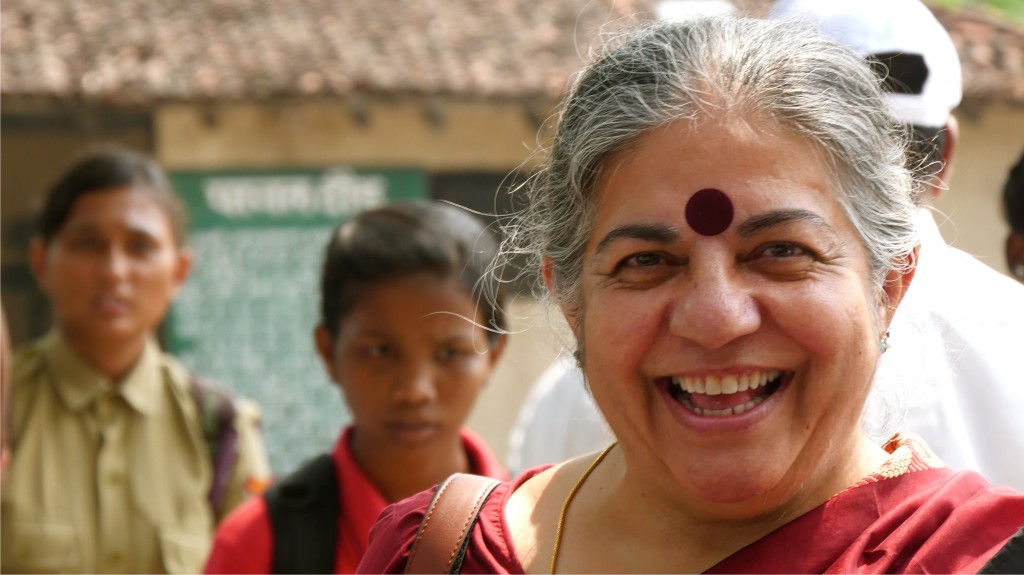