We’re back from India. And… 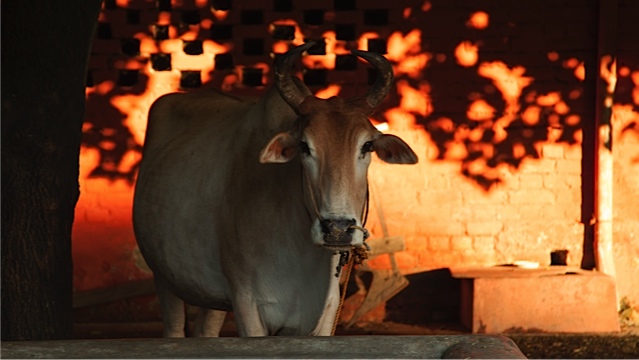 What does a bullock have to do with The Seeds of Vandana Shiva?

Quite a bit it turns out…

We just spent two weeks with Vandana on her farm in Northern India. While conducting interviews and collecting footage for the film, we also joined a diverse group of students from all over the world–and all over India–there to attend a month long A-Z intensive on agro ecology and organic food systems.

Little wonder cattle are revered in India. On small farms they provide manure for fertilizer, muscle power to till fields, along with milk for the family and to sell to the community. Their dung is also used for fuel and in the construction of buildings. Who needs to buy gas guzzling tractors or toxic chemical inputs when this placid guy can give you so much?

There are so many fascinating things to learn about the web of life and how–with cooperation, not domination–it can sustain us. Though we enjoyed sneaking in to the lectures and talks, we also spent many hours with Vandana herself, exploring a gamut of topics, ranging from her introduction to indigenous spirituality by the tribal women of the Himalayas to her role in the 1999 “Battle of Seattle” protests against the WTO.

Speaking of spirituality, Jim Becket and Jim Whitney just spent several days with her in New York City where they filmed at the Religions of the Earth Conference at Union Theological Seminary and at the People’s Climate March, the largest climate change protest in history. Focused on talks scheduled to take place at the United Nations this week, more than 1,500 organizations took part in the New York demonstrations, with satellite events all over the world.

Since more than 40% of greenhouse gases can be attributed to industrial agriculture, Vandana has been a long time promoter of agro-ecology as a viable antidote. Here’s a clip from a discussion we had with her last week. The treaty she refers to is the United Nations Framework Convention on Climate Change (UNFCCC) that was negotiated at the Earth Summit in Rio de Janeiro in 1992.

Of course we would not have these comments on film without your support! So again, we must thank all of you who contributed to our seed fund campaign. Our filming trip to India was a huge success, and we can’t wait to go through our reams of footage to begin the (long) process of putting together the film. By the way, we also collected seeds, spices, and hand woven cotton stoles while we were in India, which we will distribute, as promised, to our valued donors.